New Chicago is an emergent city. It is a city designed through a series of simple steps resulting in a new, complex form. Algorithm 1) The largest Parisian radial road, the Place de l’Etoile, site of the Arc de Triomphe, is centrally placed; 2) From the Etoile, twelve Chicago roadways are extended as vectors corresponding to their actual length within the area burned during the Chicago Fire of 1871; 3) From the terminus of these vectors, twelve additional radials are placed; 4) Roadways from each of the twelve radials are extended until they intersect with another radial or are arbitrarily terminated. 5) The shapes that emerge from the intersected roadways are modified using a cracking algorithm devised by architects Aranda/Lasch. 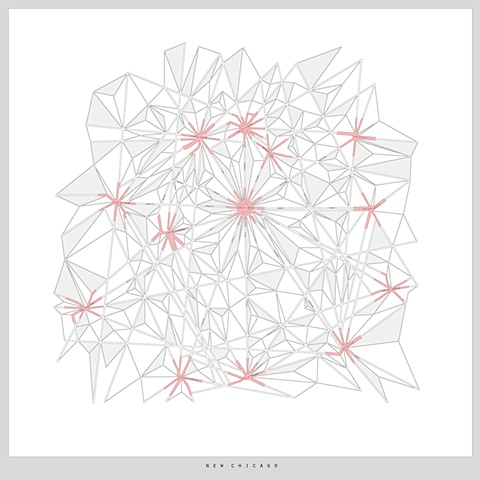